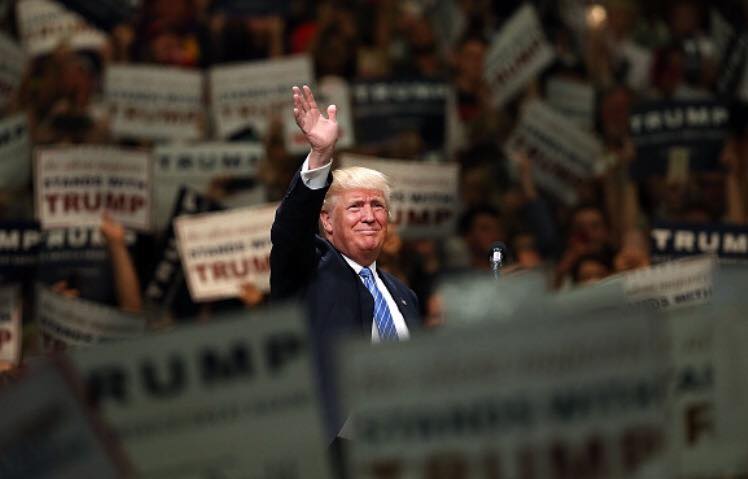 In his book “How to Build the Most Valuable Asset of Any Business”, Donald Trump explains a concept that help us interpret his decision to run again in the 2024 presidential primaries and the coldness with which he greeted Elon Musk’s unblocking of his Twitter account, namely that “if you don’t manage your brand someone else will do it for you, and that someone will probably be your competitor.” Evidently the most valuable asset he is referring to is his brand, that is, the brand and-most importantly-the intrinsic value it represents.

Those who know his history know that the eruptive former president has based a large part of his successes on the value of his brand, in which he has invested since he was in his early thirties when he took the baton of the Trump Organization from his father; it is enough to search the web to find a multitude of stock photos and videos that show how, since the 1980s, the young Donald gave visibility to his name in any way possible: the helicopter in which he flew over Manhattan, the famous Tower on Fifth Avenue, the casinos and … politics.

Trump sensed early on that the political arena was a great way to be the center of attention and gain visibility, which is why in 1986 he decided to redo at his own expense the Wollmann Skating Ring inside Central Park, New York. A skating rink that the city administration could not put into operation despite investments of more than $20 million. “I had built huge skyscrapers in less than two years. I thought I could easily rebuild a skating rink in a matter of months,” he would tell Bill Zanker, author of the book-interview “Think Big and kick ass: in business and life”.

The fact is that on November 13 of that same year, within months of the announcement, Trump cut the ribbon on the new (and finally functioning) rink together with then-New York City Mayor Ed Koch: it was a huge success for his image, which in terms of visibility and authority was worth infinitely more than the millions invested in the construction site.

From then on, his forays into public debate multiplied and, with them, rumors of his possible presidential run would pop up practically every four years with him, it goes without saying, he let it be talked about because those information streams of newspaper pages and television reports were what fed his personal brand.

Trump can aspire to be president of the United States, so he is also a great businessman: broadly speaking, this was the message that took root among those who followed him, not, of course, of those who already disliked him then.

The mechanism worked to such an extent that on Oct. 7, 1999, live on Larry King, Trump announced the launch of an exploratory committee for his candidacy in the Reform Party primaries for the 2000 presidential election. With perfect timing, a few days later he launched “The America We Deserve”, the book in which he unveiled his political manifesto and stated that his ideal deputy would be the immensely popular TV host Oprah Winfrey, who, for her part, did not accept. 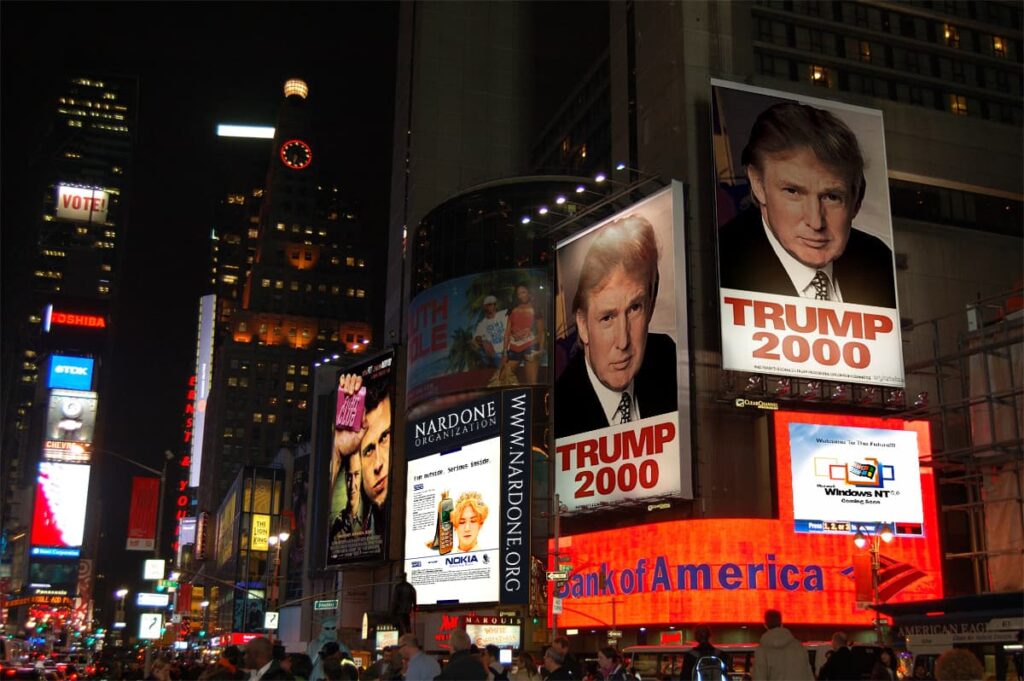 “The Donald” gave dozens of interviews, except for, on February 14, 2000, announcing his retirement, because of the sharp internal divisions within the party founded by Ross Perot, which evidently precluded him from being able to play on equal terms with Democrats and Republicans. That experience was followed by rumors of his possible run for governor of New York State in 2006, and, two years later, an interview with the New York Post in which he admitted that he was willing to consider a run for the White House.

But it is entirely likely that Trump made the decision to really try it on the evening of May 1, 2011 when, during the traditional annual White House Correspondents’ Dinner, Obama mocked him while sitting in the audience next to his wife Melania.

Yeah, but why? In the weeks before, Trump attacked Obama, launching a fierce campaign in which he went so far as to question his eligibility by asserting that he was not actually born in America and repeatedly challenging him to prove otherwise by publishing his birth certificate. Which, indeed, Obama did on April 27, putting an end to the controversy.

Evidently, however, the then-president must have been quite upset, to the point that he used that official appointment to retaliate by humiliating Donald Trump live worldwide, delivering a several-minute monologue (with no right of reply) during which he even showed a rendering depicting a casino-style White House “here are the changes he will make when he is president.”

In all likelihood, wounded pride in the worldview triggered feelings of revenge in the New York tycoon’s mind, driving him, in June 2015, to challenge the entire Republican Party establishment and subsequently, against all odds, to beat Hillary Clinton by becoming the 45th president of the United States of America.

Many are still wondering why, despite the sharply below-expectation Midterm result and the consequent skepticism of some in the GOP (acronym for Grand Old Party, ed.), Trump decided to announce his candidacy in the Republican primaries on November 15.

Those who are surprised are essentially divided between those who do not know the facts I have quickly lined up previously and those who are prejudicially opposed to the blond former president, regardless of whether they are Democratic or Republican sympathizers.

That said, it is quite evident that, in his mind, Trump has never in the least considered not running for office, simply because this election campaign in addition to giving him the opportunity to thunder back to his seat in the Oval Office, will with certainty be an opportunity to nurture his brand by participating as an undisputed protagonist in the competition that for the next two years will catalyze the attention of the entire world. Why give it up?

After a poll voted on by the monstrous figure of more than 15 million users, on November 20 Elon Musk announced the unblocking of the @realDonaldTrump account, which, however, is still stuck on the last tweets posted on January 6, 2021 during the Capitol Hill assault.

Too bad that in the meantime, Trump has not been sitting on his hands but, on the contrary, has seen fit to ride the discontent of millions of followers also banned from Twitter and other platforms homologated to the dictates of single-mindedness by founding TMTG (an acronym for Trump Media & Technology Group, ed.) to start Truth, his “discrimination-free” social network. 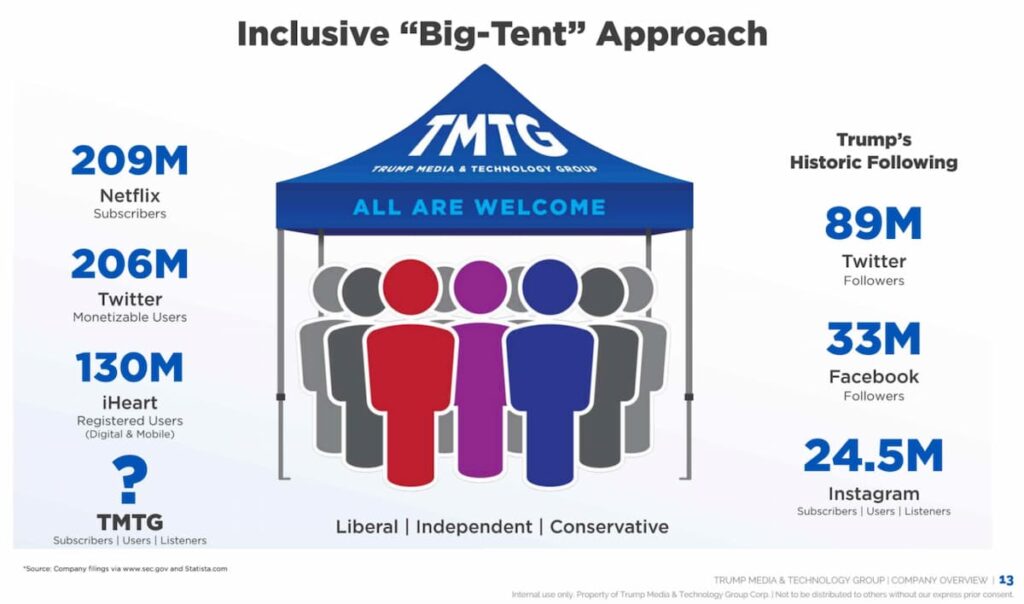 A slide from TTMG’s pitch deck

Again, it is worth noting the reaction, thanks to which Trump managed to turn into a positive occasion, one of the lowest moments of his parabola, during which many were quick to suggest that without the social stage he would no longer have the visibility needed to remain on the crest of the wave. Evidently they were wrong again this time.

That said, Truth Social has seen spikes in interest but, complicit in its presence being confined to the U.S. market, its user base remains small compared to the growth targets set a year ago by TMTG, when the company promised investors that the app would reach 56 million users by 2024 and 81 million by 2026.

Trump currently has about 4.5 million followers on Truth Social, or one-twentieth of the nearly 88 million followers he has on Twitter: far too few for someone as fond of huge numbers as he is to give it up lightly. Clearly, the importance of the commitments made to investors that enabled TMTG to reach – according to the latest Forbes estimate – a value of around $3.5 billion, prevails in this case. 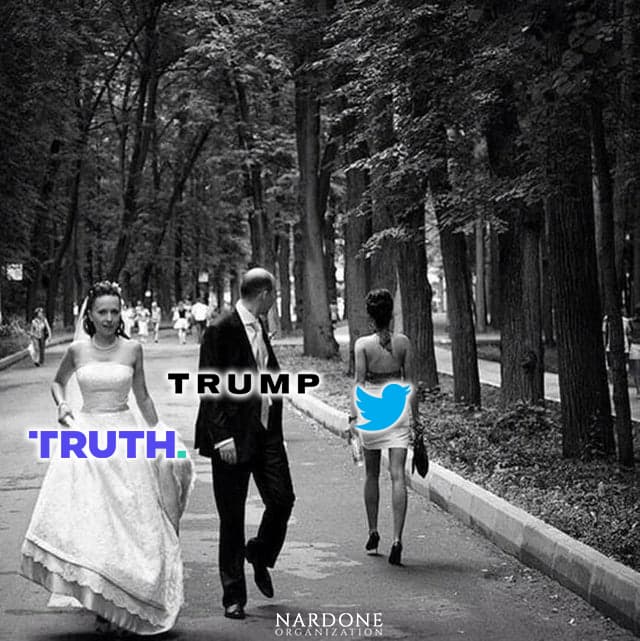 At the same time, however, Elon Musk’s purchase of Twitter has considerably changed the context around which TMTG’s business model was built, depriving it, to a large extent, of what should have been Truth Social’s hallmark, namely the guarantee of freedom of expression. Incidentally, it should be noted that even before the advent of Musk, this was not a target exclusively manned by Trump’s social, as platforms popular with so-called MAGA Republicans (Trump supporters, MAGA stands for the slogan Make America Great Again, ed.) such as Gab, Parler, and especially Gettr, have sprung up previously.

The scenario is constantly evolving, and it is a safe bet that it will give us more knockout blows, among which Elon Musk’s takeover of Truth Social is by no means to be ruled out, along the lines of what Apple did in 1997 to bring back Steve Jobs: it acquired NeXT, the company he had meanwhile founded, using the NeXTStep operating system as the basis for the OS X of the new Mac computers.

Similarly, Twitter’s neo-owner by acquiring TMTG could bring home a package that includes some 5 million users, a user experience that Trump said was very good as well as, of course, a partner who would help relaunch the platform for good. Of course, many would not approve, but after all, these are the same people who said that if Musk came along they would abandon Twitter, and instead never left.

What is certain is that in this case, as in the decision to run again, the Brand First rule applies to Trump: victories and money are “only” a consequence. 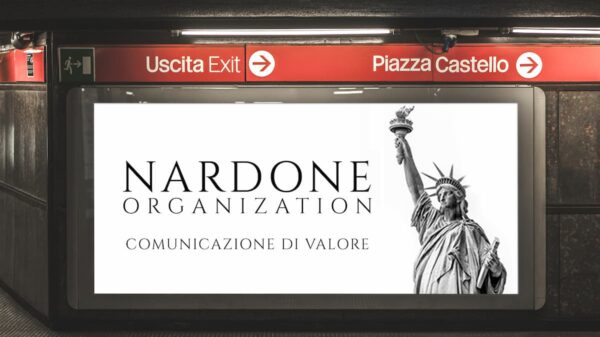 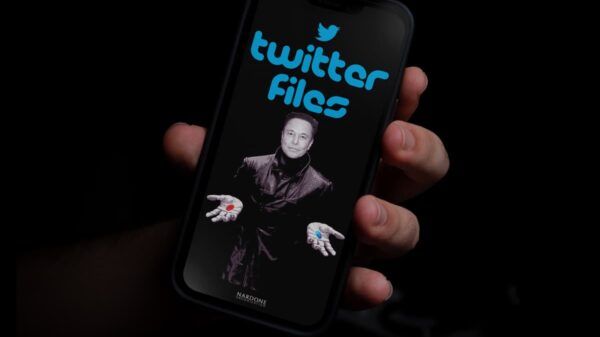 Name: Democrats, Nickname: Russian hackers. In short, this is what emerges from the Twitter Files disclosed by Elon Musk at the hands of journalist...