If the Democrats are crying, the Republicans are not laughing. We could summarize thus, according to the forces currently in the field, the long challenge of the primaries that will accompany the presidential election that, in 2016, will appoint a successor to Barak Obama in the White House. Yes, because it is likely to contend for the final victory will be two candidates mirror weak as Hillary Rodham Clinton and Jeb Bush. Besides, if at Capitol Street still struggle a lot to accept the (second) application of the former First Lady, by Republicans is an air of resignation to the fact that so much, in the end, the primary will win the brother and son respectively Presidents of the number 43 and 41 of the United States.

In short, the horizon looms a clash between the two most powerful families in the US, a Clinton against Bush. A real saga. To be fair it should be noted that, net of political judgment on his work, from the point of view of the message of change is a big step backwards compared to the winds of change blowing in the sails of the Obama candidacy.

In this case, despite a campaign certainly well studied, the obstacles on the way Hillary are basically known, ranging from the many skeletons in the closet of the family, to his failures as Secretary of State (Libya scandal and e-mail), to shadows on the origin of the – very substantial – donations received by the Clinton Foundation, to get to his positions in economic policy, notoriously adverse to the middle class in the ratio of one “income redistribution” blatantly left. It tells you something? I bet yes, wanting to synthesize the maximum we could translate the concept into two words: more taxes. If we add to this that is at the threshold of the seventies, it appears properly sympathetic and that, as demonstrated during the campaign of 2008, then lost against Obama, when under pressure, there are good chances that goes haywire, the framework of democratic concerns is nice that fact.

Clinton said, we come to the Republicans who, besides Jeb – acronym for John Ellis Bush – see currently running two other sons of art: one legitimate, the libertarian Rand Paul, son of Ron and the other acquired, Marco Rubio , political godson of Jeb Bush, who was the real mentor, supporting him in his candidacy for the Senate in 2010. Mark, son of Cuban immigrants modest, however, has decided to cut the umbilical cord launching into an application in the name of generational change and break with the centers of power that have ruled almost continuously since the nineties in America today.

Here, casting his eyes over the GOP primary, appears quite evident that a figure like Marco Rubio would certainly be helpful to Bush for several reasons. The first is that they are both of Florida, has historically been crucial for the final victory in the elections; the second concerns two target Americans on which anyone cultivate the ambition to win the White House must necessarily point, such as the young and Hispanics. However, while on the latter Bush, also and above all thanks to his wife Columba, who is Mexican, seems to fit fairly well, young electorate can hardly be said to have the same appeal of his former dolphin. Mind you, in this case the problem is not so much the identity card, as the weight of a surname that, like it or not, refers to the past as, indeed, that of his likely opponent. It goes without saying, then, that the two future contenders, one that manages to convince more young people by persuading them not to boycott the polls, will have a good chance to bring home the game. 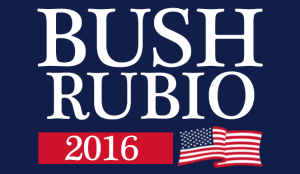 The prodigal son who returns to his father’s house, the American dream embodied to perfection by the personal history of Rubio, the fact that for the hard-core conservatives surname Bush is a certainty and the votes of young, Hispanic and Florida: the ingredients for the success of the Bush – Rubio ticket would seem to be really everyone, but there is a but, and even trivial.

This is the 12th amendment to the US Constitution, which requires voters who vote to elect the president and his deputy, to vote for at least one candidate who is not resident in the same state of the voter. It so happens that the last previous dates back to 2000 and involves the ticket consists of the older brother Jeb, George W. and Dick Cheney who, for the occasion, had to move from Texas to Wyoming. Returning to today the difference is that Jeb Bush, despite being born in Texas, has planted several decades from its roots in Miami (was governor of Florida), which is also the major constituencies of the same Rubio that, in fact, , he rolled up his sleeves to win support even outside of his state.

Technically, for the voters of Florida, there would also have the option of voting disjointed but, considering it would amount to an erosion of consensus in a state decisive exclude that is on the list of possible things. Ergo, realistically speaking, the only way to realize a ticket certainly well stocked and in many respects Financo fascinating as that composed of Bush and Rubio, who would be the first decides to bring her residence in Texas.

The alternatives? Jeb could decide – as indeed did Romney – to choose its candidate for vice fishing from the deck of the other candidates for the Republican nomination, or alternatively, that earlier precettando Wisconsin Gov. Scott Walker, provided that, however, does not want to play the Paper of gender diversity, opting for the former CEO of Hewlett-Packard Carly Fiorina, former head of the presidential campaign of Senator John McCain (then defeated by Obama in 2008), and considered among the most influential women of the GOP.

That said, the story of the American elections teaches us that, as the plot of every Hollywood film that respects, the path leading to Washington is especially long and littered with a myriad of variables and twists that can change the ‘entire scenario at any moment.

Your email address will not be published. Required fields are marked *